I received a notice about spraying from the county office. What does this mean?

Regulated drains are managed by a county drainage board and there are laws regarding what notice they have to give to landowners affected by maintenance to those drains. If you received a notice, that means that the county drain that runs through your property is scheduled for assessment and maintenance.

If you have found yourself on our website, it means that this regulated drain has been scheduled for periodic maintenance under Indiana Code 36-9-27-34(c).

Do I have to let you use my private property to access the drainage ditch?

According to Indiana state law, the county surveyor, drainage board, or an authorized representative of these has the right of entry up to seventy-five (75) feet from the top edge of each bank of an open drain. See Indiana Code 36-9-27-33

If entering your private property is necessary for us to perform our work, we will do anything we can to avoid damage to your lawn, landscaping, authorized structures, or crops.

How can I request that you do not spray on my property?

Indiana
The most effective way to request that we do not spray on your property is to contact your county surveyor’s office and make a formal, written request. In your request letter, explain why you do not want the spraying and assume responsibility for the maintenance of that area. Your request will be reviewed at the next county drainage board meeting. Keep in mind that, if your request is granted, you may be liable for damages caused by a poorly maintained drainage ditch (see Indiana Code 36-9-27-46 (c) ).

Why do you need to control vegetation in these areas?

For most right-of-way uses, safety remains a major reason for managing vegetation. Trees, brush and weeds along these rights-of-way can create hazards.

Excessive vegetation prevents proper drainage, which can damage to nearby roadbeds by creating potholes and other hazards.

Trees growing into power lines can cause electric power outages and make maintenance difficult and dangerous. In addition, areas around utility substations and land beneath transmission towers require a vegetation-free zone to prevent fire hazards and ensure the transfer of electricity. There are real dangers and human health problems if there is a lack of power to hospitals, police and other public services.

Invasive plants threaten to create a monoculture where one plant type dominates an area. Invasive plants choke out native plant species and change wildlife habitats so animals cannot utilize the area. Selective herbicides control these invasive plant species while promoting native plants that in turn attract a wide range of wildlife. More than 50 years of research by Dr. William Bramble, a forest ecologist, and Dr. William Byrnes, an ecologist specializing in forest soils, support the use of selective herbicides to increase biodiversity. (The Bramble and Byrnes study was done in conjunction with Penn State University, Purdue, University and the Pennsylvania Game Commission.) While mechanical methods can be used to manage invasive plants, these techniques often cause more damage to an area than herbicides and can open areas to new invasion of other invasive plants.

Why do you need to use herbicides? Can't you just cut the vegetation?

Mowing and trimming remain important parts of any vegetation maintenance program. But mechanical maintenance alone cannot protect these areas adequately. Besides being labor-intensive, mechanical methods can cause soil compaction that can lead to soil erosion. In addition, flailing blades and moving parts pose a danger to employees, livestock and wildlife.

Mowing brush tends to cause the plants to respond by sending out multiple resprouts — the plant’s natural defense to the cutting. This only worsens the vegetation problem.

In some cases, mechanical methods quite simply cannot be used. Steep terrain may limit access by mowers, and in the case of railroads and substations, their crushed-stone construction makes mechanical weed control impossible.

Herbicide controls unwanted brush and eliminates resprouting. Because of this improved control, crews and heavy machinery visit the area less frequently, meaning less impact on property near yours.

Will this herbicide application harm my ornamentals or garden?

Our herbicide product mix has the potential to harm woody or broadleaf plants that come in direct contact with the spray. Therefore, our applicators take care to apply only on targeted vegetation specified by your local government. Crews use extra caution to protect your ornamentals or garden, often leaving untreated “buffer” zones that add an extra measure of protection. When making foliar applications, crews carefully monitor wind speed and direction to assure accuracy.

Drift control agents are also mixed with the spray solution to produce larger, heavier droplets that aid application accuracy and reduce the chance of off-target drift.

How do you know the spray solution won't hurt animals?

For ditch bank applications, we use only products that have a “pasture label,” meaning they have been rigorously tested and have received a non-toxic rating under the label-specified mix rates.

The mode of action of triclopyr, the active ingredient in Garlon 3A and our most common spray solution mix, affects plants only. The herbicide’s active ingredient disrupts the growth process within the pant by affecting enzymes unique to plants. Garlon 3A does not have a similar effect on animals or insects.

To ensure there are no unintended effects to pets, livestock or wildlife, the EPA requires extensive testing. Researchers determine the highest dose of a product that still shows no negative effect on animals and calls this the No-Observable-Adverse-Effect Level (NOAEL).

Scientists also determine a maximum exposure level — exposure to the highest estimated concentration level that could be expected with normal use. Using these two measurements, they calculate a “safety factor.” This factor shows a multiple of the highest labeled application rate that an animal would have to be exposed to in order to reach NOAEL.

For instance, a factor of 10X means that an animal would have to be expose to 10 times the maximum expected label application rate of herbicide to reach NOAEL.

As you can see in the Exposure Assessment chart for Garlon 3A herbicide, factors for wildlife range from 3X to 225X. 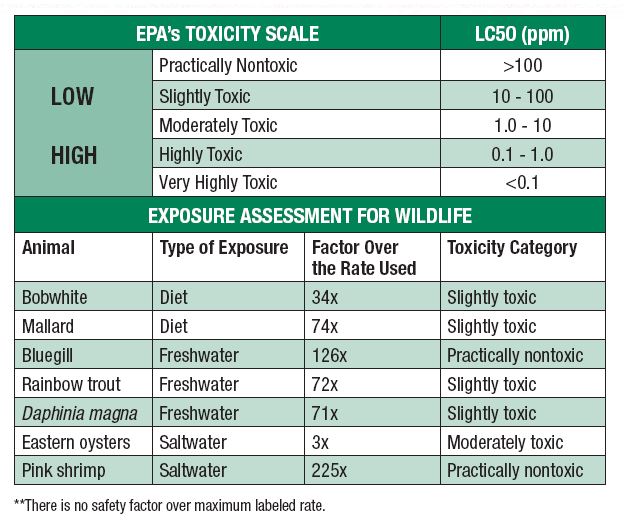 What if I have eaten some treated berries?

What if I walk across a treated area?

Exposure may occur from walking across an area still damp from a foliar treatment. However, the dose you’d receive from this type of activity is not likely to cause any harm. Using NOAEL figures and the maximum expected exposure, scientists have determined that an average person’s exposure would be substantially below the level where any adverse effect would be expected when walking through an area that was sprayed at the maximum labeled rate. Still, we do not recommend walking through a treated area until the vegetation has dried completely. In most cases, our spray solution is completely dry within 1 hour.

Do I need to stay indoors during the application?

No. However, it’s a good idea to stay away from the application site during treatment and shortly thereafter. After applicators apply the foliar treatment, avoid walking through the area until the vegetation dries.

What happens to plants after they've been treated?

The active ingredient in our most common spray solution, triclopyr, works like a growth regulator found only in plants. It enters treated vegetation through leaves and uses the plant’s own transportation system to move into the roots and leaves. It induces rapid growth, which disrupts food production, and causes the plant to die from lack of nutrients. This only happens in plants because animals do not have the same enzymes that are affected by triclopyr.

Will the herbicide remain in the soil?

Our spray solution is broken down by soil microorganisms (fungi and bacteria) and sunlight. Final breakdown products are carbon dioxide, water and other organic materials. The breakdown rate depends on rainfall, soil temperature and how these factors impact soil microorganism activity — the main cause of breakdown. The time required to break down 50 percent of the active ingredient in soil ranges from 30 to 45 days.

Is it likely that the herbicide spray will seep into groundwater?

It is not likely that our spray solution will seep into groundwater due to environmental factors and the product’s chemical properties. Our herbicide binds tightly to soil organic matter and clay particles over time, which limits its downward movement in the soil. Researchers find most of the active ingredient remains in the upper 12 inches of soil — far from the water table.

Is your application safe around bees?

Should I put my pasture animals away?

I'm an organic farmer and I don't want you to spray my property.

We are registered DriftWatch® pesticide applicators and use this software to check spray areas for specialty crops, such as organic farms, prior to our spray application. If you are not registered there, it would be a good idea to do so.

If your organic farm is not registered on DriftWatch®, contact your county surveyor’s office and make a formal, written request letter. In your written letter, explain why you do not want the spraying and assume responsibility for the maintenance of that area. Keep in mind that, if your request is granted, you may be liable for damages caused by a poorly maintained drainage ditch (see Indiana Code 36-9-27-46 (c) ).